Soups of the world!

One of the very few good things about airports is the opportunity to observe returning holidaymakers – and their travel souvenir ideas. We have all sympathised at the sight of poor Mum staggering under the weight of a straw donkey the size of the Balearics, Dad clutching those strange long noodle floating things and, of course, the boys back from a stag weekend clutching anything that wasn’t tied down. 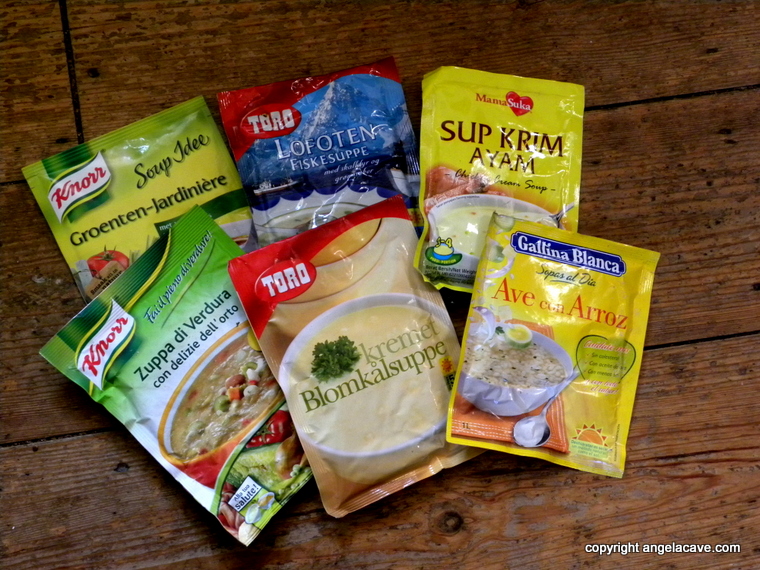 I have been the victim of a badly packed suitcase containing , it seemed, both olive oil and wine which, having been given the gentle touch of the baggage handlers had leaked over everyone else’s luggage – but no one observing my fairly frequent comings and goings would guess the nature of my chosen souvenir – packet soups!

I have no idea why I have this strange compulsion but put me anywhere near a supermarket in a strange land and I am off like a truffle hound. Since I mostly make soups from scratch at home it isn’t even a particularly useful addition to my larder but I just love the names and the pictures and it does give a sort of insight into the culinary traditions of the country – it also means that on nights when I am late and lazy I can delve into my secret stash and come up with something interesting – and guessing how much water to add and whether it should be hot or cold is a challenge that I am always up for – it always seems to be vaguely drinkable after 10 minutes or so!

Currently in my emergency drawer I have Avgolemo from Mykonos, Sopa de Cebola and Sopa de Rabo de Boi and Crema di Maiz plus a Caribbean soup intriguingly called Fish Tea and boasting that it is made with real fish – is there an alternative to real fish? – a couple written in cyleric script which look vegetabley and, my personal favourite, a Norwegian soup rejoicing in the name of Killingsuppe – something for the guest who outstays their welcome perhaps!

My soup drawer is a constant source of surprise and in the dark days of winter a lovely reminder of warmer climes and happy times so next time you are stuck for a souvenir eschew that bottle of liquer made from cactus, put down the salt and pepper set in the shape of St Peters and get yourself to the supermarket – who knows what gems you could unearth – it is cheap, easy to pack and unbreakable – in fact the more I think about it the more I am convinced that packet soup is the holiday souvenir of the future – see you in the supermercato!!